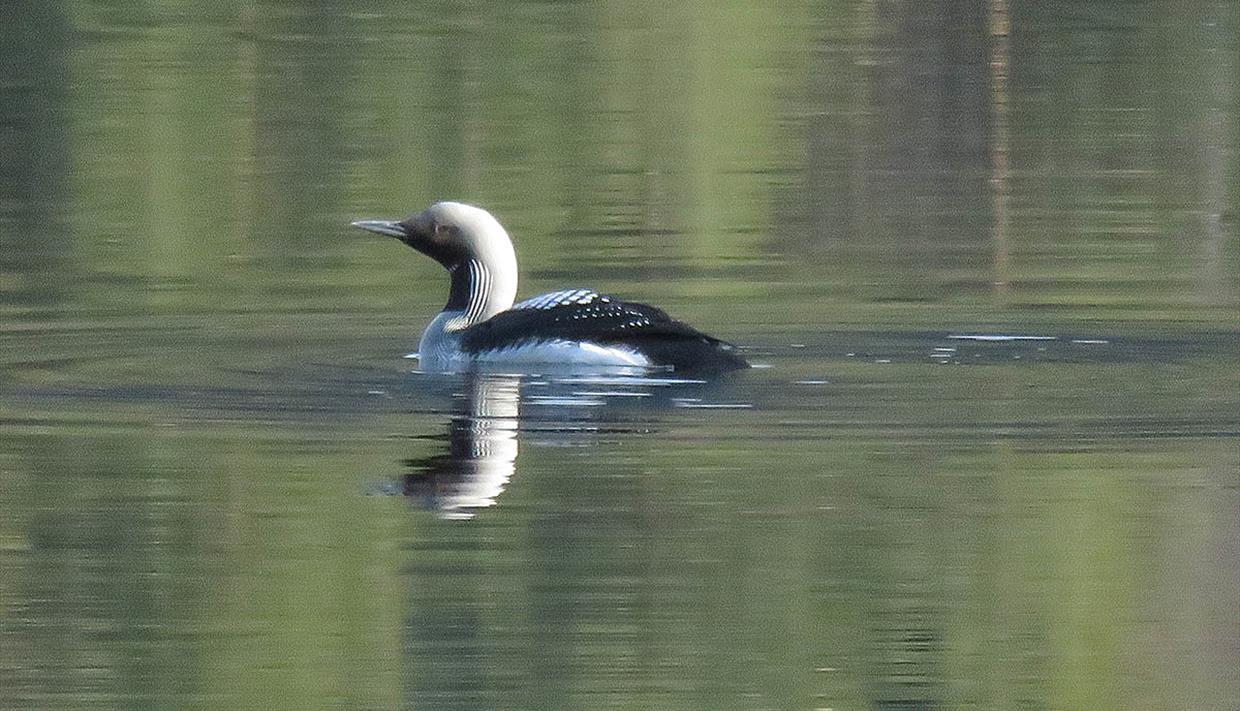 You are here Things to Do > Birdwatching - Fløafjorden and Dokkafjorden

Lake Fløafjorden:
Lake Fløafjorden is accessible from Leira by driving the forest road Fløafjordvegen from the former elementary school (behind the Elkjøp store) towards the dam. Keep going on the narrow track straight ahead until you reach the parking and resting area just at the eastern shore of the lake. It is a good place to drop by while in the area around Fagernes. Early mornings are best, but also an afternoon/evening visit can pay off. Spring (April/May) is the time of the year with most species, but the lake is accessible all year. When there is snow, you will have to walk the last kilometer to the lake. A telescope is recommended.

Common Goldeneye and Mallard are there all year round. White-throated Dipper, Whooper Swan and Common Goosander are common outside the breeding season, with Common and Velvet Scoter possible, too. White-throated Dipper are present in the River Skamåni all year round, but numbers top during winter. During migration Eurasian Teal, Tufted Duck, Eurasian Wigeon, Black-throated Diver, Horned/Slavonian Grebe and waders such as Common Sandpiper, Wood Sandpiper, Common Greenshank and Eurasian Curlew are possible, as well as Greylag Goose and Canada Goose (feral species). During summer, Barn and Sand Swallows as well as Common House Martins hunt for insects over the water surface. Osprey can be seen in the area, too.

In the forest, Great Spotted, Black and European Green Woodpecker breed. Goldcrest, Eurasian Wren, Reed Bunting and other forest species can be observed, too. In good owl years, Tengmalm's Owl may breed in the forest nearby.

Skamåni og Dokkafjorden:
Skamåni is the name of the river out of Fløafjorden downstream towards Dokkafjorden, the next larger lake. White-throated Dipper lives in Skamåni all year round. Lake Dokkafjorden holds much of the same birds as Fløafjorden. Common Goldeneye and Mallard are most common, but especially during the spring migration lots of exciting birds can show up, such as Horned/Slavonian Grebe, Eurasion Wigeon and Common Goosander. Black-throated Divers arrive a little later. Common Cranes rest on the dry ground before the water level rises, and even one or another Grayleg or Pink-footed Goose is possible. Garganey has occured, too. Among waders, Eurasian Curlew and Common Snipe can be found, and with luck even Jack Snipe.

The area is best visited from the country road Venstringslinna between Leira and Vestringsbyda/Sundvollen. Park at Vestringsbygda barnehage (the local kindergarden), and walk over the ski bridge down towards the water or park at Valdres Golf and explore the shoreline from there. Please make sure your car does not stand in the way and that you are not disturbing the golfers. A telescope is recommeded.

MapExplore the region
2920 Leira i Valdres