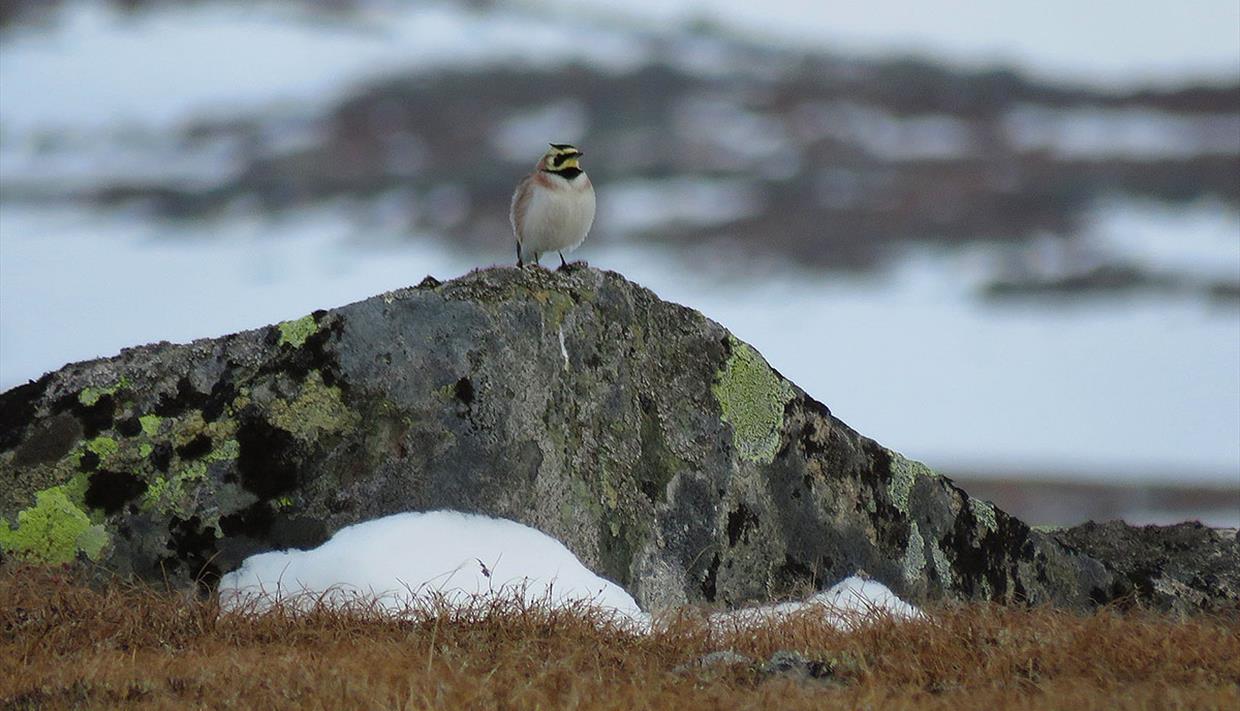 You are here Things to Do > Birdwatching - Valdresflye

Valdresflye is an alpine high mountain plateau south east of Jotunheimen and north west of Langsua National Park in the municipalities Øystre Slidre and Vågå. A number of sought-after mountain species can be found here.

Many of them can be spotted right from the car, by driving slowly over the plateau (make use of the long lay-bys on both sides of the road to not obstruct traffic). The highest section of the road is usually the most productive. This tactic works especially well early in the season when the ground is still snow covered and the birds gather on bare spots and rocks close to the road.
Later in the season we recommend to bird on foot. Park close by the café Flye1389 at the highest point of the road and follow the marked (but not signposted) trail towards the top of Fisketjernnuten (1527 m.a.s.l.). Temminck's Stint should be fairly easy to locate by ear and is found around the larger boulders close to the road. Northern Wheatear and Meadow Pipit are numerous. Further up (from approx. half way up the hill) Shore Lark and Rock Ptarmigan can be encountered. From the summit, continue off track in a north-easterly direction to the steep hillside towards Heimdalen. On the snow fields below the top plateau, Snow Bunting usually can be found well into summer. Return along the same way or descend off-track in a southerly direction where the mountain side is less steep. On rock fields at the foot of the mountain, Lapland Longspur (Lapland Bunting) is possible. On the Fisketjerna lakes there are often ducks, sometimes Long-tailed duck among them. To identify them a telescope is needed.
Common Ringed Plover and Purple Sandpiper are easiest to find by walking around the lakes on the western side of the road. During some years Long-tailed Skuas visit Valdresflye, and Rough-legged Buzzard can be seen hunting overhead.

In the cliffs on the eastern side of Synshorn (south of the Valdresflye plateau), kestrels usually breed. Around Heimdalsmunnen (north of the Valdresflye plateau) try for Ring Ouzel, Northern Wheatear and Bluethroat in the willows and the hillside towards Brurskardknappen. On the opposite side of the road, towards Leirungsdalen, Golden Plovers breed.

Directions: By car from either south or north along road 51 onto the Valdresflye high mountain plateau. By bus from Fagernes/Beitostølen or Vågå/Lom from approx. medio June (www.jvb.no and www.innlandstrafikk.no).

Best season: From early June (depending on the snow conditions) to approx. medio July, preferably early during the day.